Actor Paul Shah and model Usha Upreti’s new video ‘Maya Garaula’ has been released. The video also stars Sudhir Shrestha and Sunisha Bajgaon along with actor Paul and Usha. The song is written by Dinesh Thapaliya and music composed by Acharya Krishna Bhardraj. The song features the voices of Saroj Oli and Asmita Adhikari.

It is a presentation of Subha media house, the video has been released through Gajab TV‘s official YouTube channel. So far, the video has been watched by 4.5 lakh viewers and received more than 37,000 likes. As earlier also, in Subha media’s other music video paul shah was featured. Paul shah is a hot property of the Nepali Music video in recent times.

The video has been cinematographed by Nawaraj Uprety and edited by Aman Manandhar. Similarly, the video of this song made in Vikram Swar’s Choreography / Concept has been directed by Saroj Oli. A lot of effort has been put into filming the video, and the result can be seen. 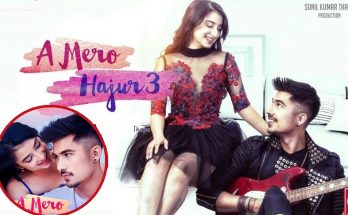